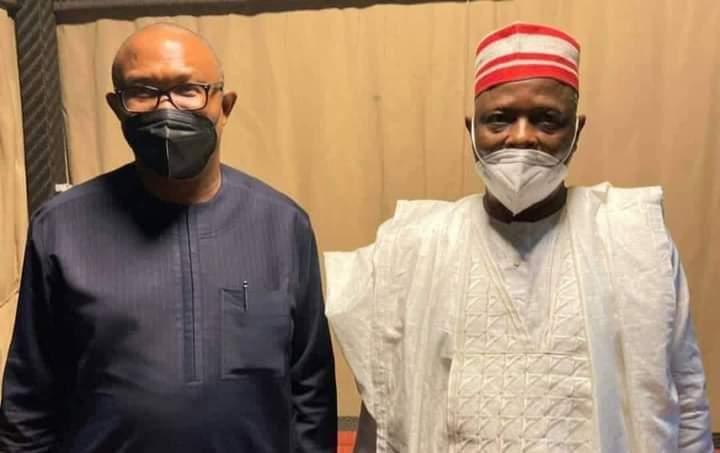 By Clifford Ndujihe & Dapo Akinrefon
VICE Presidential Candidate of the Labour Party, LP, and leaders of the party, yesterday said that LP Presidential Candidate, Mr. Peter Obi; and his New Nigerian Peoples Party, NNPP counterpart, Senator Rabiu Musa Kwankwaso, are still in talks to field a joint ticket for the 2023 presidential poll.
In separate chats with Vanguard, LP National Chairman, Mr. Julius Abure; Spokesman, Dr. Yinusa Tanko; and Okupe said both parties are still discussing the plan of forming a mega alliance that will win the presidential poll in 2023.
Disclosing that the plan is to form a mega alliance, Abure said both parties are “consulting widely to make the alliance a huge success.”
Abure, who urged the INEC to extend the ongoing voters registration beyond June 30 as ordered by an Abuja Federal High Court, on Monday, said: “INEC should not disenfranchise Nigerians. It has the responsibility of ensuring that everyone of age gets his or her PVC (permanent voters’ card). Before Mr Peter Obi emerged as presidential candidate many people did not think there was a need to vote. There was hopelessness and despair in the polity. With Obi’s emergence, people now have hope and have seen the need to get the PVC. The INEC should ensure that these masses of people get their PVCs.”
Insisting that the talks and consultations are on-going, Dr Okupe said that the Labour Party and NNPP have agreed to form a new political order in the country but are yet to reach an agreement on which party will produce the presidential candidate.
According to him, both parties are in talks to beat the July 17 deadline by the Independent National Electoral Commission, INEC, for substitution of candidates.
He said: “We have not foreclosed on anything. What has happened is that there have been a lot of informal discussions and interventions on the merger. There have been a lot of third party interventions on this same issue.
“Officially, I have been involved in two meetings in two different locations where we discussed extensively. I can tell you authoritatively that I have spoken with Rabiu Kwankwaso on this matter.
“We have agreed to cooperate together as two different parties to enthrone a new political order in this country. We also agreed on working together politically and to constitute a platform on which a national grand alliance can be built in pursuit of the same goal.
“We have not reached an agreement on the issue of whether the North will be the president or the South will be the president because both sides are insisting on being the arrowhead of the union in terms of presidency. This is where we have not really agreed. As of today, that is where we stand but there are a lot of goodwill ambassadors working behind the scene.
“The options are still open. We have up till July 17 or so to take a final decision but the options are still open. We have not foreclosed on anything.”
On NNPP saying that Kwankwaso has not agreed to be Obi’s running mate, he said: “I am surprised about that and I have tried to reach out. It is something that is a bit too early. We have direct access and we are talking officially and unofficially. I heard the information but I have not been able to confirm it.”
Obi, Kwankwaso’ll decide on flagbearer – Yinusa Tanko
Also confirming the talks between LP and NNPP, the National Publicity Secretary of the LP, Dr Yinusa Tanko, told Vanguard: “Discussions are ongoing. We have realized that none of us can do this alone. We have agreed on the basic principle that we are going to work together. The alliance is needed to rescue the country from the All Progressives Congress, APC, and Peoples Democratic Party, PDP. The question of who will be the presidential candidate or vice presidential candidate will be decided by Mr. Peter Obi and Senator Rabiu Musa Kwankwaso.”