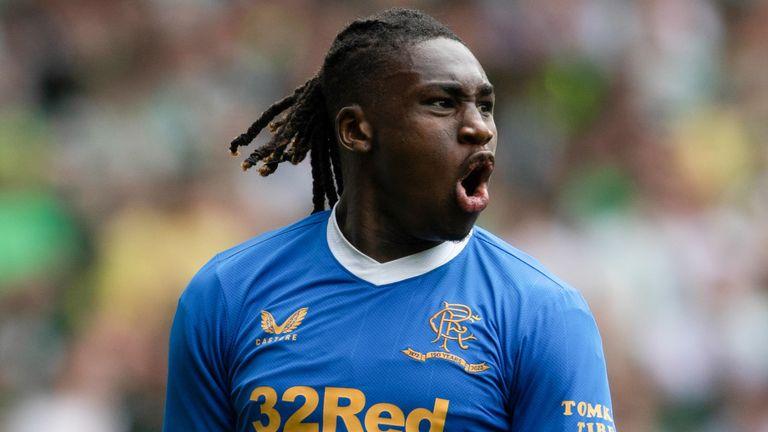 Super Eagles defender Calvin Bassey has completed his move from Rangers to Ajax. Bassey joins the Dutch champions on a five-year deal worth €23m, with another potential €3m in add-ons.
The Super Eagles star comes in as a replacement for Lisandro Martinez, who just signed for Manchester United.
Bassey had two years left on his contract with Rangers after joining the club from Leicester U23 team in 2020. However, he has left the Gers to team up with the Eredivisie champions. With Bassey now a player for Ajax, he becomes the seventh Nigerian to play for the great club.
But how did his predecessors fare with the Dutch giants?
George Finidi (1993-1996)
First on the list is Finidi George, who played for Ajax for three years between 1993-1996. Finidi had a successful spell with the Dutch Champions in his three years at the club. The current Enyimba coach made his name at his club and cemented his spot as one of the greatest wingers in the world during that time.
Finidi was part of the Ajax golden generation squad that won the Champions League in 1995. The former Super Eagles star was in action for 90 minutes in the final against AC Milan as Ajax claimed their fourth European title courtesy of a late header from Patrick Kluivert.
Finidi also played a key role in the league, helping Ajax win the Eredivisie that season. The ex-Nigerian international scored 24 goals in 122 appearances for Ajax before leaving for Real Betis in 1996.
Nwankwo Kanu (1993-1996)
Both Kanu and Finidi arrived at Ajax at the same time in 1993. Like Finidi, Kanu was also part of the dominant Ajax team that won the league title and Champions League in 1995. However, Kanu came on as a substitute in the 53rd minute for Clarence Seedorf in the Champions League final against Milan.
In addition to their Champions League title, Kanu and Finidi also won the Eredivisie titles in their three seasons at the club.
Tijani Babangida (1996-2003)
Following the success of Kanu and Finidi, Ajax brought in Tijani Babangida the same year their two Nigerian imports left. Unlike Kanu and Finidi, that arrived from Nigeria, Babangida had Dutch football experience when he joined Ajax.
The pacy winger joined the Eredivisie champions from fellow Dutch side Roda JC Kerkrade in 1996. Babangida stayed longer at Ajax than Kanu and Finidi.
The ex-Super Eagles winger stayed with Ajax for eight years, winning the Eredivisie in the 1997/1998 season and two Dutch Cups. Babangida made 102 appearances for Ajax, scoring 25 goals.
Christopher Kanu (1997-2002)
A year after Kanu left, Ajax signed his brother Christopher Ogbonna Kanu. However, the move never worked out for the younger Kanu, making just 18 appearances in his five years at the club.
Sunday Oliseh (1997-1999)
The same year Christopher arrived at Ajax, Sunday Oliseh also signed for the Dutch champions from FC Cologne in Germany.
Although he only stayed at the club for two years, Oliseh had a successful spell with Ajax, winning one league title and two Dutch Cups. Oliseh made 76 appearances for Ajax before leaving for Juventus in 1999.
Pius Ikedia (1999-2005)
Shortly after Sunday Oliseh left, Ajax brought Pius Ikedia, a player similar to Babangida. Ikedia arrived from Asec Mimosas, joining Ajax’s U21 team. Although he would later move up to the first team, Ikedia had a forgettable time at Ajax.
The ex-Nigerian international made just 32 appearances for the club, scoring two goals in his six-year stint.
Culled from Pulse