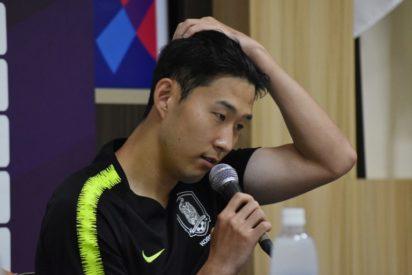 By Biodun Busari
Son Woong-jung has advised his son, Tottenham Hotspur forward, Son Heung-min to become a world class player by joining any of the top clubs in the world.
Son Heung-min had a sensational outing in the 2021/22 Premier League season scoring 23 goals from open play for the North London club, making him share the Golden Boot with Liverpool’s Mohamed Salah.
The 29-year-old South Korean captain who helped Antonio Conte’s side secure a spot in next season Champions League by finishing fourth on the log was also honoured by his country.
He was awarded the Cheongnyong Medal, his country’s highest sporting honour, by South Korea’s president, Yoon Seok-youl on June 3.
Son’s father, however, has not rated him a world class player despite encomium showered on his son, thus, advising him to work harder to become a world’s class player.
Son’s father told CGTN via GOAL as Son has not won a major trophy at club level.
The forward was part of the Tottenham squad that finished second in the Premier League in 2016-17. He also helped them reach the Champions League final in 2018-19 and the EFL Cup final in 2020-21.
“He must work harder and make more progress. If he is satisfied with what he has achieved now, crisis is on the way. He must always try to do better to stay in the best form, don’t you think?
“Instead of being happy to stay where he is, I always want him to be 10 per cent better… he must be able to play a solid role in one of the world’s top clubs. That’s when he will become a world class player. He scored a lot of goals this year, but it doesn’t mean he will do the same next year.”
Tottenham have the potential to firmly establish themselves among Europe’s elite as they possess one of the best stadia and training grounds in Europe. Also, Conte is regarded by many football fans and pundits as an elite coach after winning five league titles in management.
Spurs also have some fine players in Rodrigo Bentancur, Cristian Romero, Dejan Kulusevski, Harry Kane and others who combined well with Son.
Son signed a four-year contract extension in 2021 that will keep him at Spurs till June 2025.
When asked about his decision to leave the club, Son said after renewal of his contract, “There was no decision. It was easy. I’m so happy to be here… it was already a big honour to play here for six years. The club have showed me massive, massive respect and obviously I’m very happy to be here.”