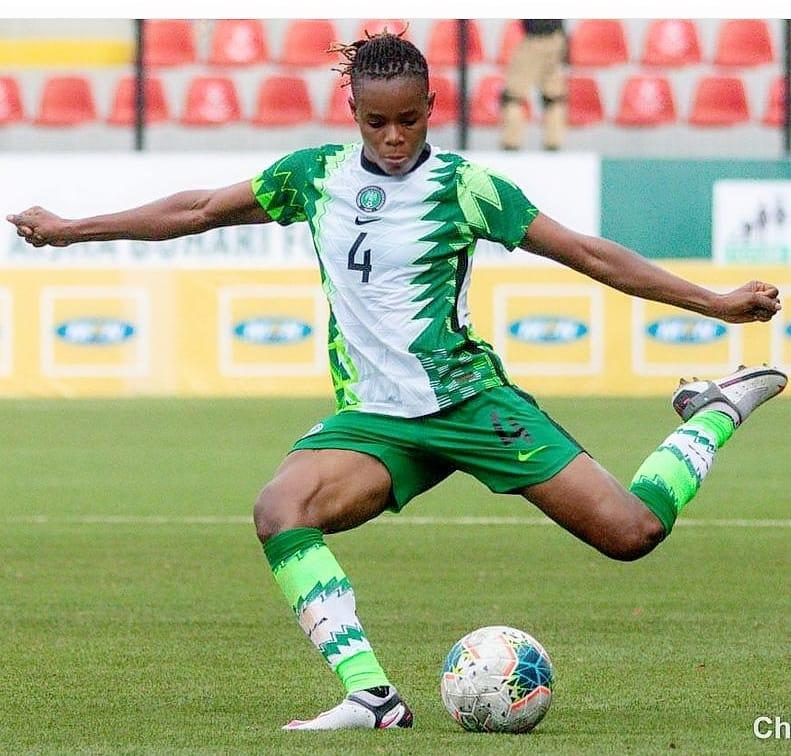 Glory Ogbonna, Super Falcons defender, has said that the team is disappointed over its inability to retain the African Cup of Nations trophy it won in 2018.
Ogbonna, made this known when she spoke with the News Agency of Nigeria (NAN) from the team’s base in Morocco.
She said that their mission at the Women Africa Cup of Nation (WAFCON) was to retain the trophy and also qualify for the Women World Cup at the championship concluded in Morocco on Saturday.
She said that while they were happy that they were able to qualify for the World Cup, they were, however, sad that they failed to retain the trophy.
She also told NAN that they did their best to achieve the two objectives but it was unfortunate that their best was not good enough.
Ogbonna noted that they were even more pained with the third place match they lost 0-1 to Zambia on Friday.
”It was our plan to secure the world Cup ticket and also win the trophy for a record 10th time.
”Like they always say, it is  a game of football and anything can happen. We tried our best but we are very disappointed with the overall outcome of our participation in WAFCON in Morocco.
”We thought we could win the third place match to compensate for not winning the converted trophy but it didn’t turn out like that,” she said.
It would be recalled that the Super Falcons lost their semi final game 4-5 on penalty kick to the host Morocco 4-5 after a 1-1 draw in regulation time.
The loss to Zambia made it the third game the lost after losing 1-2 in their opening match against South Africa.